This article is part of the BIG Intelligence Reports Series. For more information about this article or if you have any comments, questions or suggestions for this series, please send us a note support@BIGhealthcare.ca.

Impact of Overtime During COVID-19 Pandemic

Some violent events are so severe that they result in many medical and psychological problems including persistent mental stress, depression, anxiety, depression, and post-traumatic stress disorder.

According to the Ontario Workplace Safety and Insurance Board, attacks, violent events, and harassment in healthcare institutions have gradually risen. It is estimated that the occurrence of these acts has doubled from 2012 to 2019.

Furthermore, workplace violence in hospitals accounted for 14% of all lost-time injuries in 2019 higher than the injury claims permitted for exposure to dangerous substances or conditions. These data are only the tip of the iceberg, as problematic as they seem. The actual situation is likely more frightening as violent and aggressive episodes have been significantly underreported.

According to Sharleen Stewart, head of SEIU Healthcare, hospital employees are overwhelmingly female, the violence is preventable, and the rise in assaults is contributing to understaffing.

“Health workers should not have to be apprehensive about being physically mauled by a patient or a patient’s relative as they continue to fight on the front lines of COVID-19, tending to patients and saving lives. But regrettably, this is their reality due to a lack of security and support from healthcare institutions and the Ontario government.”

BIG Healthcare (a healthcare company that collects and analyzes financial and operational data from hospitals in Ontario, Canada) provides detailed information on the costs of hospital violence in Ontario. 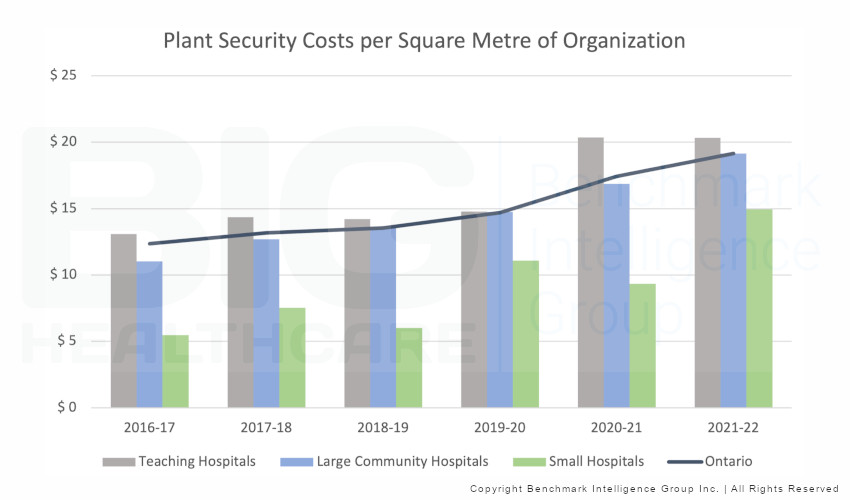 The Response from Unions

According to Michael Hurley, President of the Ontario Canadian Union of Public Employees (CUPE), the high number of violent cases is causing a hostile work environment.

“The violence has taken the shape of racially focused abuse, sexual assault and harassment, verbal abuse, and physical attack… violence is widely acclaimed as a major source of employee dissatisfaction.”

Unions of Healthcare workers, including the SEIU Healthcare and Canadian Union of Public Employees (CUPE) unions, have been negotiating with the Ontario Hospital Association for a new contract that will include increased health and safety measures for hospital workers. Also, the unions have demanded that the government of Ontario enhance the safeguards in place to protect front-line employees.

The unions of hospital workers have also highlighted some steps that could be taken by health stakeholders and the government to address the precarious state of hospital security.

These measures are capital intensive and will require vast and consistent investments in hospital security by healthcare stakeholders and the government.

Security services are an essential aspect of any healthcare institution. Hospitals are obligated to ensure the safety and security of patients, employees, and visitors. Yet, many hospitals struggle with increasing levels of violence. Below are some of the possible reasons for surging hospital violence.

Hospitals are open and readily accessible. According to Tony York, a hospital security expert and Executive Vice President at Paladin Security and PalAmerican Security, “hospitals are distinct in that they are open and accepting of everyone.” It means that other patients and staff may be exposed to erratic or volatile people, such as drug addicts, people with mental health problems, or convicts visiting for care.” Furthermore, healthcare security must not be intrusive or get in the way of people accessing critical health services.

Hospital buildings are not optimized for security. Many hospitals do not prioritize security during construction. Also, some hospitals have obsolete infrastructure that does not meet current security needs.

The COVID-19 pandemic has worsened the security crisis in hospitals. It has created an environment highly fraught and conducive to hostility and violence. Additionally, hospital employees are grappling with societal disagreements over implementing public health regulations, new screening protocols, and visitor restrictions. Patients can sometimes act aggressively toward hospital workers out of grief for losing a loved one or worry for their health.

Next Steps and Conclusions

A 2018 survey conducted by the ASHE (American Society for Healthcare Engineering) on Hospital Security confirms that maintaining security has become 82 percent more challenging over the past two years. As a result, 61 percent of hospitals want to increase security spending, while 91 percent intend to introduce aggressive behavior training.

In conclusion, BIG Healthcare’s data suggests that security costs for healthcare institutions in Ontario will continue to increase. The inevitable rise in hospital security expenditure is necessary to provide a secure environment for hospital staff and patients.